The text below comes from the journal I kept when I was in Kirkwall in August 1993. It's a unique place. Visit it if you can. 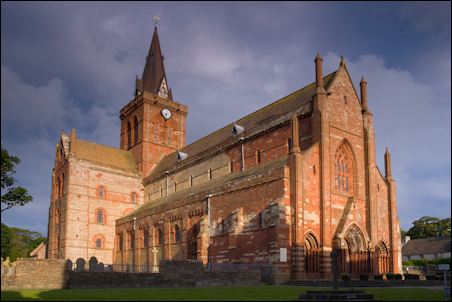 Its presence originates in events which occurred over eight hundred years ago during the time of Norse rule. Just after Easter 1117, Hakon tricked his cousin Magnus into meeting him on the island of Egilsay with a view to discussing the ownership of Orkney. As the peace-loving Magnus pleaded for his life and prayed for the soul of his murderer, Hakon ordered him to be struck down with an axe. Magnus was seen as a martyr and soon canonised when rumours of miracles spread. Before setting out to win possession of the islands, his nephew Rognvald vowed to build a church in Magnus' name if he was successful. It was duly started in 1137, under the expert eye of masons from Durham and the supervision of Rognvald's father.

In the far corners of the choir aisles, I came across the elaborate tombs of two Orkney-born explorers. John Rae, a doctor who joined the Hudson Bay Company in 1833, participated in many expeditions to the Arctic. Whilst William Balfour Baikie, a naval surgeon, navigated up the River Niger into 250 miles of uncharted territory.

Between them is the communion table which is overlooked by three golden statues set on a red background on the rear wall. Flanked by his father Kol and Bishop William the Old, Rognvald stands in the middle carrying a model of the cathedral as he designed it.

I went over for a closer inspection, but could see nothing other than darkness. Before moving to a seat in the choir, I looked at the ornate wooden doors and pondered over what lay behind them. By the marble font, I sat absorbed by sculpted faces peering down on me. So many of the columns are decorated with strange human and animal heads. Finally, the time came for me to leave. From the serenity and mystery of the past, I stepped back into the outside world and the present.

From there I went into the old kitchen and then up the main staircase to the first floor. A stone hand basin was clearly visible in the antechamber to one of the Earl's apartments where he would no doubt have kept his visitors waiting before granting them an audience. In several rooms, water closets had been built into recesses in the walls.

On entering the great hall with its elaborate fireplace and bay windows, I was surprised to hear disembodied voices and found that to the rear it overlooks the bowls club. It was hard to imagine the huge dining table where Earl Patrick would have sat almost four hundred years ago, surrounded by tapestries, trophies and servants, entertaining those he sought to impress.

As a party of Scandinavian teenagers began a noisy invasion, I crossed over the road to the mid-12th century Bishop's Palace which was constructed by Earl Rognvald to provide his friend William the Old with premises near the cathedral. In its day, the rectangular hall-house would have comprised apartments built over cellars, but now the wooden floors have all gone and the grey stone walls stand empty. It was here in 1263 that King Haakon of Norway died following his ill-fated attempt to prevent the Western Isles falling into Scottish hands at the Battle of Largs. Within three years his son had sold them to Alexander III ending four centuries of Norse rule. However, Orkney and Shetland were not relinquished for another two hundred years.

The palace itself was rebuilt in the 15th century and then restored by Bishop Reid in the mid-1500s when he added a strong round tower known as the "Moosie Toor". A dark, spiral staircase leads to the top and a bird's eye view of the cathedral. Standing cautiously back from the edge in a gusting wind, I found myself opposite its rose window, looking down on the graveyard. Over the rooftops on the western horizon, Wideford Hill, a gentle curved bump rising some 250 metres above sea level, was the only patch of high land to be seen.

Now in the care of Historic Environment Scotland. Open daily from April to October. Admission charge.

Originally built as two manses for members of the cathedral clergy, it was extended in 1574 and bought by the Baikies of Tankerness for use as a town house in the early seventeenth century. Following restoration in the 1960s, it is now a museum which charts the history of Orkney from its earliest inhabitants to the present day.

On the ground floor, displays explain what archaeological finds have revealed about life in the islands from agriculture to religion. Weapons, tools, jewellery, combs, pottery and even human remains provide a fascinating portrait of ancient times. Many artefacts are kept in perspex boxes with strict temperature and humidity controls. A series of rooms including stones carved with runic inscriptions tells the story of the Picts and Vikings. Upstairs the exhibits date from more recent times with paintings, family heirlooms and documents relating to local customs. A room is devoted to the Arctic explorer, John Rae.
Admission free. Open daily Monday - Saturday from 10am – 5pm all year (but closes for lunch October - April). Official web site

The gardens to the rear of the house are an ideal spot to eat your sandwiches on a sunny day.

If you are sightseeing around the islands, then an indispensable tool is the Leisure and Tourist Map for Orkney and Shetland which pinpoints well over 100 important places to see and has a gazetteer with a short description of each.