A few others are given on my main Orkney page

These are just some of the ancient places that can be found on Mainland Orkney:

Built before the Pyramids, Stonehenge and the Great Wall of China, the ten houses that can be seen today were occupied from about 3100 to 2500 BC. Historians believe that the site was gradually abandoned as the island's community developed and people's needs changed. Over the centuries it was covered with sand and remained untouched until a winter storm blew up in 1850, thus bringing the Stone Age into the modern era.

It sits just above the magnificent white beach of the Bay of Skaill that arcs round in one huge semicircle. Since their original roofs of turf have long since disappeared, visitors can now look down into the mound and see the layout of the village. The main "street", a semisubterranean passage linking the houses, runs down the middle of the site from today's entrance to what is thought to be a workshop at the other end where tools would have been made.

If you'd like to read all about it and see lots of colour photos, check out the 48-page paperback guide by the Arnolds produced in May 1997: Stone Age Farmers Beside the Sea: Scotland's Prehistoric Village of Skara Brae.

Ring of Brodgar photo copyright 2004 The Internet Guide to Scotland

This stone circle has been dated to at least 1560 BC. Even though today only thirty-six stones remain out of the original sixty, the size of the site is breathtaking. Set on a promontory between the Lochs of Harray and Stenness, the circle is exactly 125 Megalithic yards across (just over 100 metres). Around it runs a ditch some three metres deep which alone would have taken 80,000 man-hours to dig. The stones themselves were somehow brought from a quarry situated to the north of Skara Brae and carefully erected at six degree intervals. The openness of the Ring's location would have made it an ideal setting for a lunar observatory if that was indeed its role. Several burial mounds exist in the immediate vicinity, but the centre of the circle has never been excavated.

Local man Sigurd Towrie has detailed information on all this.
Robert Pollock has also written about this circle.

Accessed via a field of cattle, this, the best example of a chambered tomb to have been found anywhere in north-west Europe, appears as a large green hump on the landscape. A wide ditch circles the mound to form an enclosure over a hundred metres across.

In modern times Maes Howe wasn't successfully investigated until 1861 when someone managed to get in through the roof which had long since collapsed. Only the remains of a human skull and some horse bones were found. It is believed that the Vikings plundered the tomb in the mid-twelfth century and carted off whatever had been lying there for the previous 4000 years. In compensation, they left behind a series of inscriptions which amounts to the biggest collection of runic writing in the world.

Mysteriously, several of the runes talk of treasure being carried away by Hakon, whilst others speak as though it is still hidden in the mound and to the north-west. However, most of their writings are frighteningly similar to the graffiti we see in our streets and playgrounds today. In the Norse equivalent of "I woz 'ere", one set of squiggles proudly proclaims "Haermund Hardaxe carved these runes". Tryggr, Arnfithr and Ottarfila all recorded their visits in the same juvenile manner, but another scribe obviously thought himself too famous to bother with his name. "These runes were carved by the man most skilled in runes in the Western Ocean" he brags. Someone else, with an equal show of imagination, tried to carve the sixteen-character runic alphabet but unfortunately managed to get the last two wrong. Then right across the wall of the south-east side chamber next to an extremely bizarre drawing of what researchers have described as a slobbering dog stretches "Ingigerth is the most beautiful of women", under which is written "Benedikt made this cross". Whether or not they were there together remains another matter of conjecture.

Viking carvings located on the side of a tall slab that forms part of one of the corner buttresses represent a lion (which looks more like a dragon), a walrus (which could in fact be an otter with a fish in its mouth) and a most peculiar snake (which appears to have tied itself in a knot). Another pillar bears primitive lines and triangles which, through their similarity to ones found at Skara Brae, are likely to have been etched by the builders of the tomb.

Local man Sigurd Towrie has detailed information on all this.
Robert Pollock has also written about this monument.

Driving through Birsay village, you pass the 16th-century mansion of Robert Stewart whose son built the Earl's Palace in Kirkwall. Park on the coast and follow the path. The Brough is situated on a small island which can only be reached at low tide plus or minus two hours. Once over the concrete path which leads through the sand and rocks, you find yourself amongst a jumble of ruins from Pictish, Early Christian and Viking settlements.

Enclosed within a large square wall, lie the remains of a 12th-century church and cemetery which may have been built over an earlier ecclesiastical site established by the Celts. A Pictish symbol stone was discovered in this graveyard. With the original in an Edinburgh museum, a copy now stands in its place, showing three bearded warriors, an eagle and a fantasy beast known as the swimming elephant.

Around the church are the remains of other buildings which have proved harder to identify. Birsay is said to have been the seat of Earl Thorfinn the Mighty and some of what can be seen today could be what is left of his palace. Archaeologists though are in no doubt as to the significance of the foundations found up on the grassy slope. Long ago, they were Norse hall-houses. 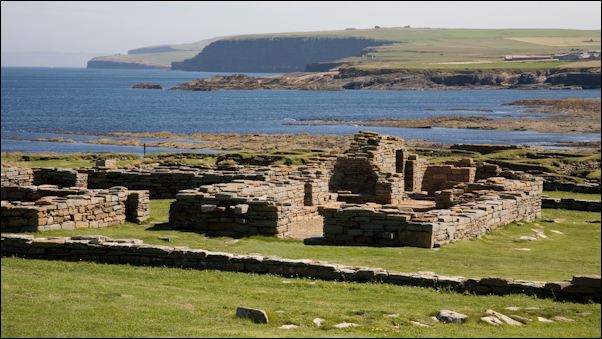 A two-thousand year old souterrain whose purpose remains unknown. Located on a farm four miles outside Kirkwall. Enclosed by iron railings in the middle of the farmyard is a sort of manhole cover which lifts to reveal an almost vertical metal ladder disappearing down into the darkness. Bring a torch! Below in the oval chamber is where the jumbled bones of six adults and twelve children were discovered in 1926 when a tractor fell through the roof. The original means of entry was probably the narrow passage which leads off one side of the chamber. It is not thought to have been built as a burial vault and yet after its initial function was fulfilled, it appears to have become the resting place either of those who used it or those who came after them.

Follow a muddy track towards what appears to be a grassy bump on the landscape and you will find this cairn which dates from around 2500 BC. After crouching down to pass through a low, narrow passage, you enter a rectangular chamber. At either end, upright stone slabs make screens behind which human remains were found in 1884. Runic letters and a bird are carved on the lintel of an opening in the side wall which gives access to a small cell where two crouched skeletons were discovered. Since most of the original roof was lost in centuries gone by, a modern structure had to be built within the earth mound. A hole provides a reasonable amount of daylight, but doesn't detract from the sensation of entering a tomb. During excavations, finds were also made of pottery whose distinctive style has become known as Unstan ware.

If you are sightseeing around the islands, then an indispensable tool is the Leisure and Tourist Map for Orkney and Shetland which pinpoints well over 100 important places to see and has a gazetteer with a short description of each.